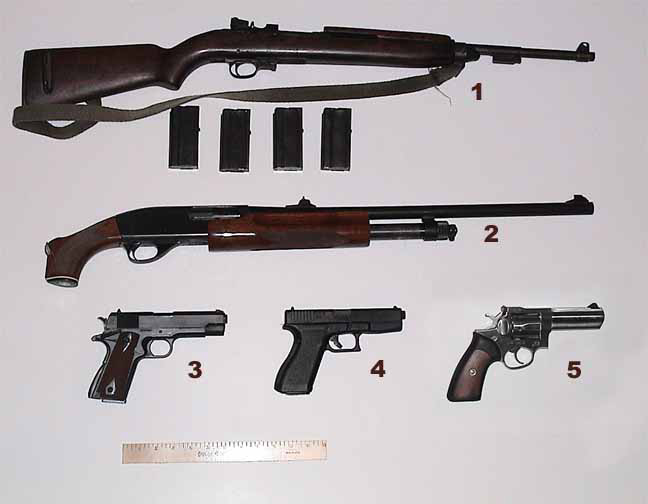 Other Items Found on Kriegman & Gabriel 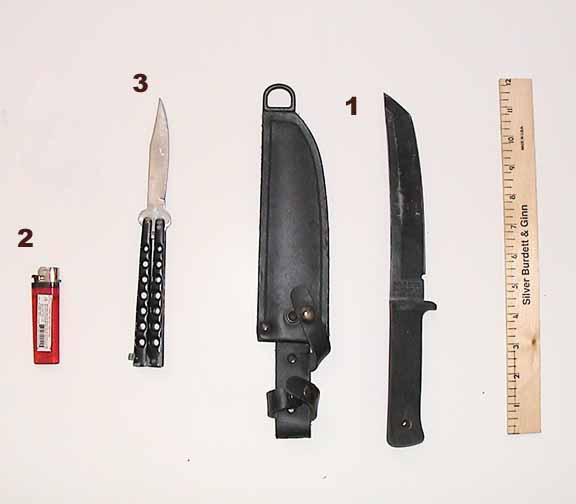 Other items found on Gabriel


Calvin Gabriel carried a U.S. M1 .30 carbine and a copy of the Colt M1911 A1 made by Norinco. He wore a black T-shirt with the word "army" printed on it, black cargo pants, and combat boots. He carried three spare magazines for his carbine. Gabriel carried a backpack that contained spare ammunition for all their weapons, 7 pipe bombs, a roll of duct tape, and 4 butane lighters.


Gabriel's M1 .30 carbine was essentially an assault rifle; it was used by the United States Armed Forces from World War II through the early sixties. It is capable of accepting 40 round magazines (Gabriel had only 15 round magazines) and fires each time the trigger is pulled. His pistol was a copy of the well known Colt .45 semiautomatic used by the U.S. Army since 1911. Kreigman's shotgun was typical of 12 gauge shotguns designed for hunting. Kriegman sawed off the stock behind the pistol grip, reducing it's length to about 34". His revolver was a standard .357 revolver, and the Glock automatic pistol he carried is the same model used as a police sidearm.


Kriegman and Gabriel carried a large amount of spare ammunition. There was 189 rounds of .30 carbine, 100 of which was loaded in stripper clips (a military device to speed up loading), 109 rounds of .45 ACP for the Glock and the Norinco, 76 rounds of .357 magnum (6 loaded in a speed loader) and 67 12 gauge shotgun shells, mostly buckshot.


The two gunmen were not experts with their weapons. They mostly used their longarms; they used the handguns in situations where their targets were confined with them at close range or immobile. Contrary to what some pundits have claimed, video games, no matter how realistic, are not a substitute for actual training. Both assailants were familiar with firearms in general, and they had fired .22 rifles. But the tapes and other accounts seem to bear out that they only had one chance to fire the weapons they actually used in the attack. They never fired any of the pistols. Shortly after the firefight with (Special Resources Officer) Leon Stetz, Kriegman switched to his revolver, firing it with one hand and carrying the shotgun in the other. He did not hit anybody with any of his 6 shots. Nobody in the hall way was hit badly enough by either Kriegman or Gabriel to stop them from running. Their lack of experience somewhat mitigated a terrible tragedy.